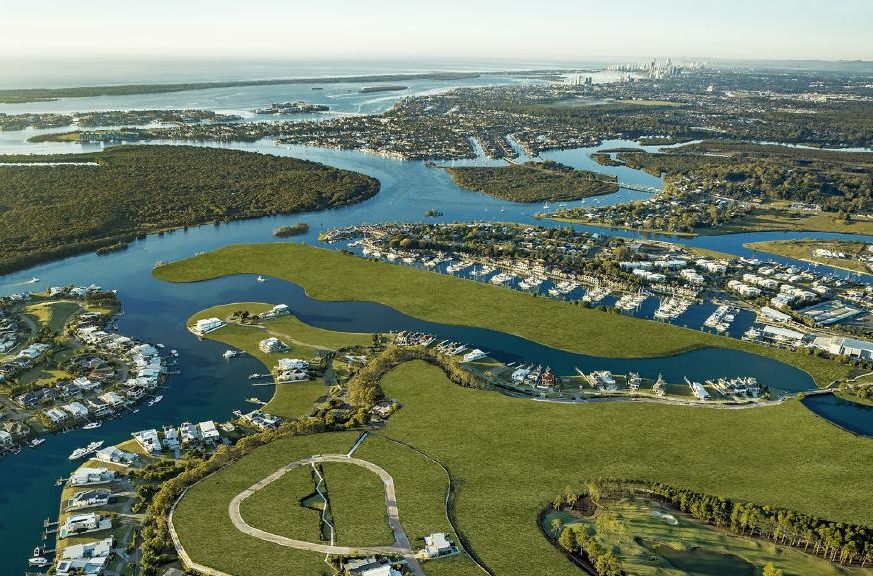 A waterfront golf house is still highly sought after with prices remaining strong, as other property prices soften.

Australia is reported by the World Factbook to have the sixth longest coastline in the world, although only 25,000 of the total mainland and territory coastline length of 59,700km appears to be counted.  Regardless of how its measured, Australia is fortunate to have a spectacular coastline that in the most part is readily accessible and often has communities nestled comfortably in its lap.  A number of other countries are similarly fortunate and it is also a significant real estate asset in Australia and other countries.

A number of developers have recognised the potential of combining waterfront property with great golf courses and a number come to mind.  While Sanctuary Cove, Hope Island, Bribie Island and Pelican Waters are high on the list, there have been a number of other new developments securing this seemingly unbeatable combination of golf and waterfront or coastline.

Secret Harbour is one such development.  Located one hour west of Perth, the first tranche of a total of three property developments has been constructed with a combination of views of the Indian Ocean to the west and a great golf course to the east.  Priced form $400,000 upwards the development has homes appealing to first home buyers right up to high net worth buyers.

The Sands, in Torquay Victoria is a similar development that has developed 400 homes with prices ranging from $450,000  up to more exclusive residences at several million dollars.  For those homes backing on to the golf course and fronting on the ocean, the prices are higher as it's rare to see these homes appearing on the market.

But there are many more, particularly in Queensland and it's clear the original developers of Sanctuary Cove, Mike and Jenny Gore, were visionaries in developing a plan for a resort community surrounding two golf courses with houses and greens following the waterways on land that was previously a dairy farm.  The Sanctuary Cove development built almost 2,000 homes and also created an additional advantage in securing an exemption from the restrictions normally applied to foreign buyers, creating a multicultural community of owners and residents.

Sanctuary Cove has also built a magnificent marina and according to out research at the time of writing, set a record for the highest priced golf property in Australia at $6.5 million in 2018.  Today, values range from $500,00 to $12million, depending on the condition of the economy.

Reports suggest these homes sharing both waterfront and close access to golf have fared better in the slowdown of property prices, since the market peaked in 2017.  Where buyers of golf property usually benefit from wide open spaces and the natural environment, having a property next to the water takes the location to another level, perhaps offering a sea breeze if located near to the ocean.

In fact it seems waterfront property remains popular, even in COVID times, with the Serenity 4212 land release amassing almost $30 million in sales to June '20.  Serenity 4212 is located adjacent to Links Hope Island Golf Club and offers housing lots with reserve and waterview land as well as absolute waterfront land for between $489,000 and $1,290,000.

A number of golf courses located close to the sea, a lake or a river may also have waterfront homes nearby and these Courses are easy to find on golfproperty.com.

On the ‘Our Courses' page, you can search golf courses throughout the world by the type of waterfront location you prefer, including:

When you find a Course that meets you location preferences, simply select View properties ‘for sale', ‘for rent' and ‘holiday rentals' to find the golf house best suiting your aspirations and needs.


Find your new home. Connect with a Local
Real Estate Expert here. Or